This mural is based on the photographs from the Whittier Public Library Historical Photograph Collection. It depicts East Whittier life in the early 1900s - in the vicinity of what is now the Whittwood Branch Library. Simon Murphy acquired property north of County Road (now Whittier Boulevard), in the late 1880s and formed the East Whittier Land and Water Company. He first planted lemons and navel oranges, but soon discovered that the area was particularly suitable for Valencia oranges.

In 1899 he began exploratory drilling, and two years later struck oil. The Murphy Oil Company went on to develop successful oil fields both on his East Whittier property and in the Coyote Hills. Dr C. W. Leffingwell purchased acreage south of County Road, on both sides of what is now Santa Gertrudes Avenue. His ranch, considered one of the premier lemon ranches in California, grew to six hundred forty acres and had its own packing house.

In 1923, Leffingwell formed the Leffingwell Chemical Company to develop and produce agricultural chemicals and sprays. On the Orchard Dale tract, just west of Leffingwell Ranch, citrus was also the dominant crop; but walnuts also did particularly well. The mural was developed by LucasLook Design and produced by Lexington Design and Fabrication. It was painted by Michael Hruska, Jim Piper, Alan Hines, and Greg Hammond. 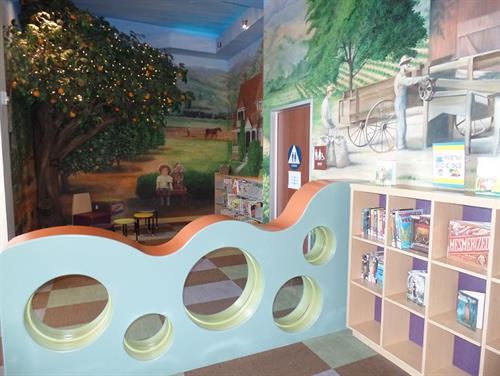